The use of mocks in unit testing is a controversial topic (maybe less so now than several years ago). I remember how, throughout my programming career, I went from mocking almost every dependency, to the "no-mocks" policy, and then to "only mock external dependencies".

None of this practices are good enough. In this article, I’ll show you which dependencies to mock, and which to use as is in your tests.

What is a mock?

Before jumping to the topic of when to mock, let’s discuss what a mock is.

People often use the terms test double and mock as synonyms, but technically, they are not:

According to Gerard Meszaros, there are 5 types of test doubles:

Such a variety may look intimidating, but in reality, they can all be grouped together into just two types: mocks and stubs. 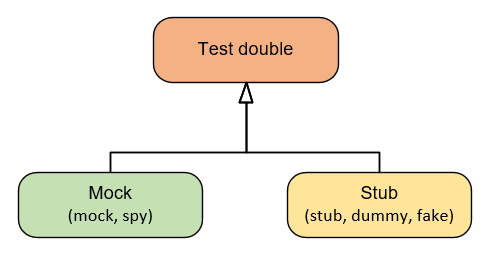 All variations of test doubles can be categorized into two types: mocks and stubs

The difference between these two types boils down to the following:

For example, sending an email is an outcoming interaction: that interaction results in a side effect in the SMTP server. A test double emulating such an interaction is a mock.

Retrieving data from the database is an incoming interaction — it doesn’t result in a side effect. The corresponding test double is a stub. 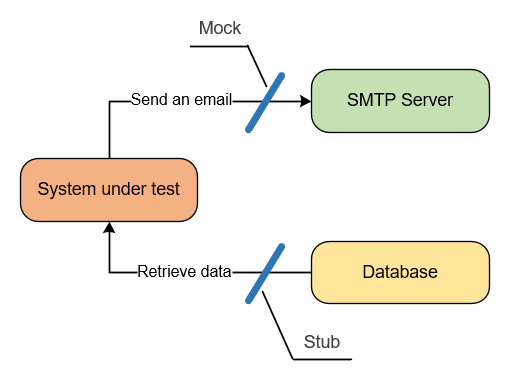 Mocks are for outcoming interaction; stubs — for incoming

All other differences between the five types of test doubles are insignificant implementation details:

On the other hand, the difference between stubs, dummies, and fakes is in how intelligent they are:

The term mock is overloaded and can mean different things in different circumstances. I mentioned already that people often use this term to mean any test double, whereas mocks are only a subset of test doubles.

But there’s another meaning for the term mock. You can refer to the classes from mocking libraries as mocks, too. These classes help you create actual mocks, but they themselves are not mocks per se:

This test uses the Mock class from the Moq mocking library. This class is a tool that enables you to create a test double — a mock. In other words, the class Mock (or Mock<IEmailGateway>) is a mock-the-tool, while the instance of that class, mock, is a mock-the-test-double.

Here’s another example of a test that uses the Mock class. The instance of that class is a stub, not mock:

This test double emulates an incoming interaction — a call that provides the SUT with input data.

On the other hand, in the previous example, the call to SendGreetingsEmail() is an outcoming interaction. Its sole purpose is to incur a side effect — send an email.

The only way to avoid test brittleness is to make those tests verify the end result (which, ideally, should be meaningful to a non-programmer), not implementation details.

In the above examples, the check

corresponds to an actual outcome, and that outcome is meaningful to a domain expert: sending a greetings email is something business people would want the system to do.

At the same time, the call to GetNumberOfUsers() is not an outcome at all. It’s an internal implementation detail regarding how the SUT gathers data necessary for the report creation. Therefore, asserting this call would lead to test fragility. It doesn’t matter how the SUT generates the end result, as long as that result is correct.

Here’s an example of such a fragile test:

Mocks are a more complicated subject: not all uses of mocks lead to test fragility, but a lot of them do. You’ll see why shortly.

Using mocks and stubs together

Sometimes you need to create a test double that exhibits the properties of both a mock and a stub:

This test uses storeMock for two purposes: it returns a canned answer and verifies a method call made by the SUT.

Notice, though, that these are two different methods: the test sets up the answer from HasEnoughInventory() but then verifies the call to RemoveInventory(). Thus, the rule of not asserting interactions with stubs is not violated here.

When a test double is both a mock and a stub, it’s still called a mock, not a stub. That’s mostly because you need to pick one name, but also because being a mock is a more important fact than being a stub.

Mocks vs. stubs and commands vs. queries

The notion of mocks and stubs ties to the command query separation (CQS) principle. The CQS principle states that every method should be either a command or a query, but not both:

In other words, asking a question should not change the answer. Code that maintains such a clear separation becomes easier to read. 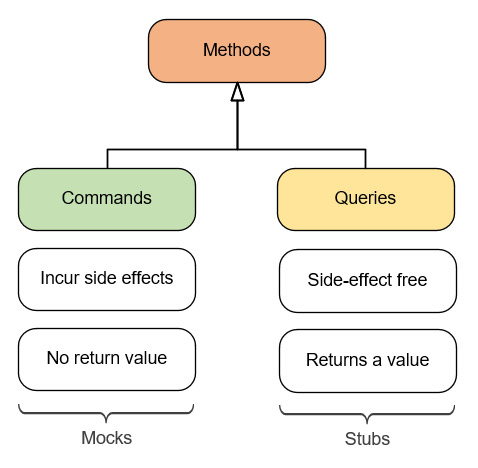 Look at the two tests from the previous examples again (I’m showing their relevant parts here):

SendGreetingsEmail() is a command whose side effect is sending an email. The test double that substitutes this command is a mock.

On the other hand, GetNumberOfUsers() is a query that returns a value and doesn’t mutate the database state. The corresponding test double is a stub.

With all these definitions out of the way, let’s talk about when you should use mocks.

You obviously don’t want to mock the system under test (SUT) itself, so the question of "When to mock?" boils down to this: "Which types of dependencies you should replace with a mock, and which — use as is in tests?"

Here are all types of unit testing dependencies I listed in the previous article:

A shared dependency corresponds to a mutable out-of-process dependency in the vast majority of cases, that’s why I’m using these two notions as synonyms here. (Check out my previous post for more details: Unit Testing Dependencies: The Complete Guide.)

There are two schools of unit testing with their own views on which types of dependencies to replace with mocks: 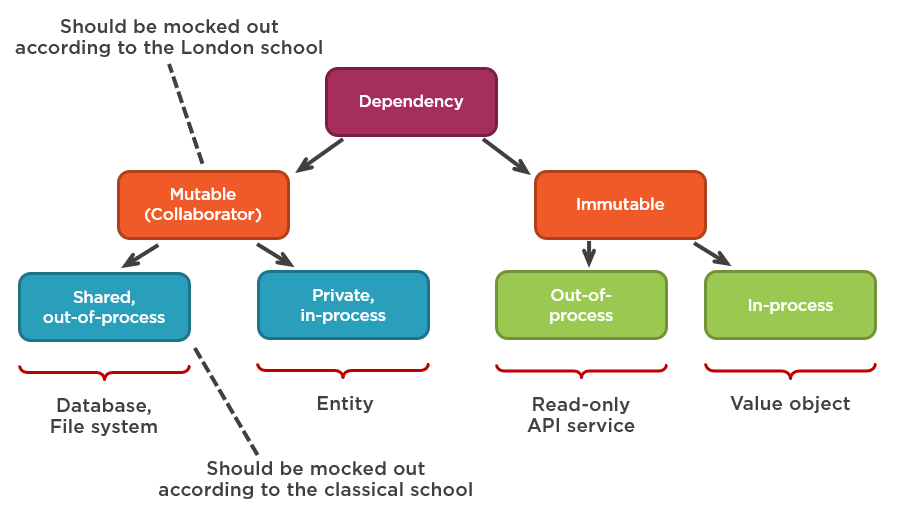 Both schools are wrong in their treatment of mocks, though the classical school is less so than the London school.

What about immutable out-of-process dependencies? Shouldn’t they be mocked out too, according to at least one of the schools?

Immutable out-of-process dependencies (such as a read-only API service), should be replaced with a test double, but that test double would be a stub, not a mock.

That’s, once again, due to the differences between mocks and stubs:

Interactions with immutable out-of-process dependencies are, by definition, incoming and thus shouldn’t be checked for in tests, only stubbed out with canned answers (both schools are OK with that).

I’ll first describe why the London school is wrong, and then — why the classical approach is wrong too.

You shouldn’t mock all mutable dependencies. To see why, we need to look at two types of communications in a typical application: intra-system and inter-system.

Here they are on a diagram: 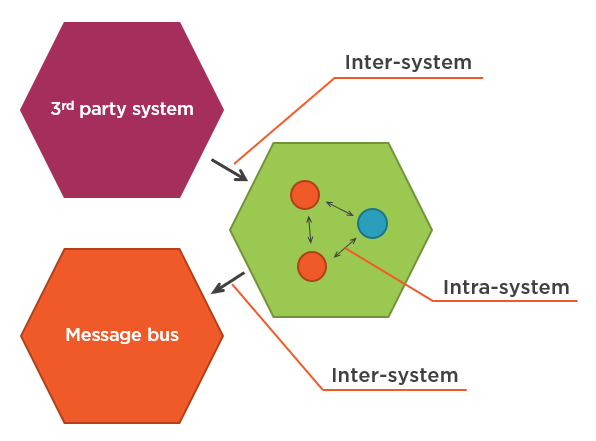 Intra-system communications are implementation details because the collaborations your domain classes go through in order to perform an operation are not part of their observable behavior. These collaborations don’t have an immediate connection to the client’s goal. Thus, coupling to such collaborations leads to fragile tests.

Inter-system communications are a different matter. Unlike collaborations between classes inside your application, the way your system talks to the external world forms the observable behavior of that system as a whole. It’s part of the contract your application must hold at all times. 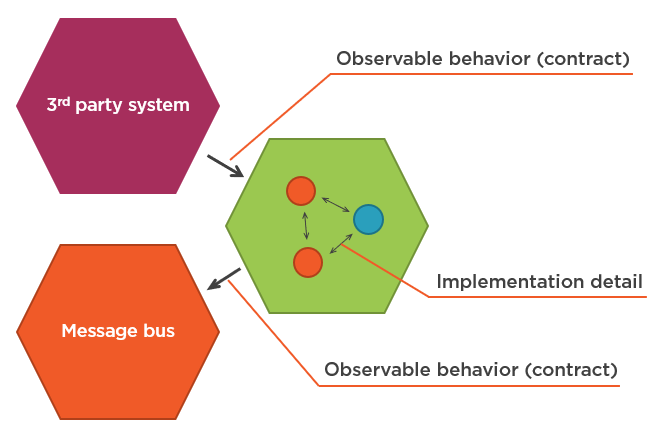 This attribute of inter-system communications stems from the way separate applications evolve together. One of the main principles of such an evolution is maintaining backward compatibility. Regardless of the refactorings you perform inside your system, the communication pattern it uses to talk to external applications should always stay in place, so that external applications can understand it. For example, messages your application emits on a bus should preserve their structure, the calls issued to an SMTP service should have the same number and type of parameters, and so on. 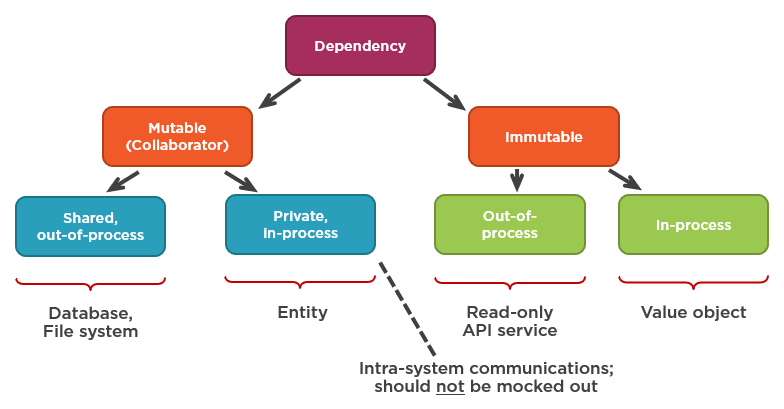 And so, the London school is wrong because it encourages the use of mocks for all mutable dependencies and doesn’t differentiate between intra-system (in-process) and inter-system (out-of-process) communications.

The classical school is better at this issue because it advocates for substituting only out-of-process dependencies such as an SMTP service, a message bus, and so on. But the classical school is not ideal in its treatment of inter-system communications, either. This school also encourages excessive use of mocks, albeit not as much as the London school. 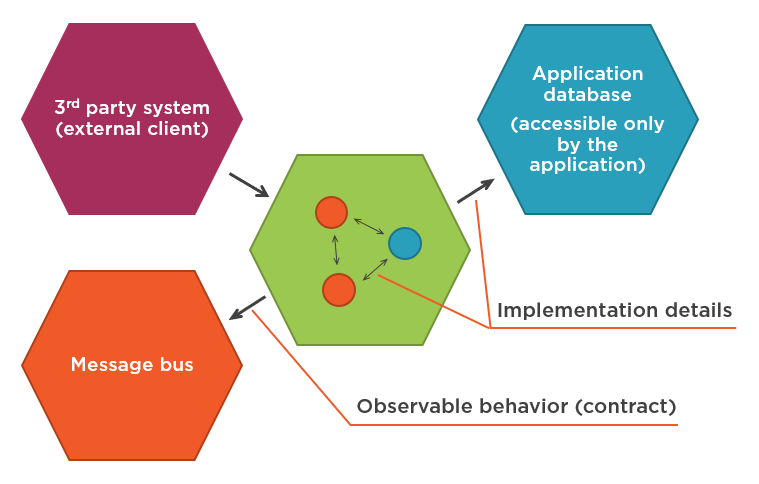 Some inter-system communications are implementation details too

A good example here is an application database: a database that is used only by your application. No external system has access to this database. Therefore, you can modify the communication pattern between your system and the application database in any way you like, as long as it doesn’t break existing functionality. Because that database is completely hidden from the eyes of the clients, you can even replace it with an entirely different storage mechanism, and no one will notice.

The use of mocks for out-of-process dependencies that you have a full control over also leads to brittle tests. You don’t want your tests to turn red every time you split a table in the database or modify the type of one of the parameters in a stored procedure. The database and your application must be treated as one system. 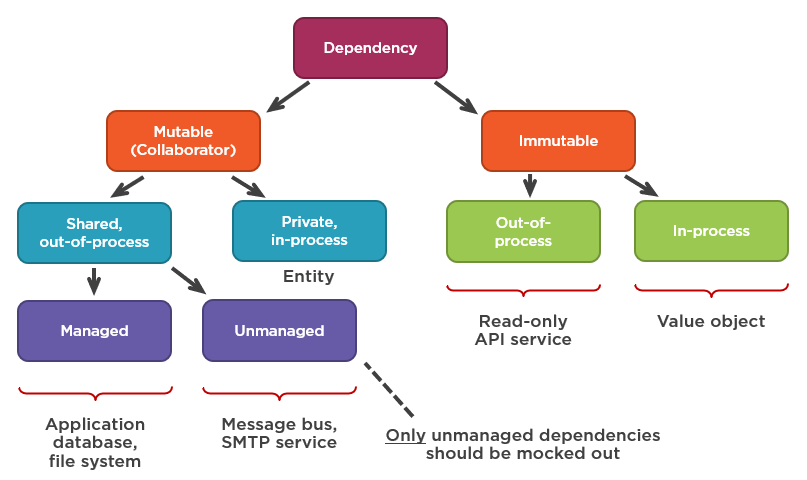 Only unmanaged dependencies can be replaced with mocks

Of course, using real instances of managed dependencies in tests poses an obvious issue: how do you test them such that your tests remain fast and reliable?

You’ll see this subject covered in depth in my book: