In this article, we’ll review the types of unit testing dependencies. This is more of a reference article, to which I’ll be referring in future posts. Still, this topic is important for establishing the common vocabulary.

So, what is a unit testing dependency? It’s a dependency that you must set up in the test before you can exercise the system under test.

If you take a typical textbook Calculator example, its dependencies will look like this:

Dependencies can be explicit, like in the example above, but they also can be implicit.

A typical example of an implicit dependency is a global state, located in a static field or variable:

In this example, DateTime.Now is an implicit dependency.

And so when it comes to explicit vs implicit dependencies, try to always follow this guideline: make as many dependencies explicit as possible.

In the above example, in means passing both the new email and the current time as arguments to UpdateEmail:

Remember, the compiler is your friend. Injecting dependencies explicitly helps you to:

The code documentation also helps with unit testing. Explicit dependencies immediately tell you what data you need to set up in tests before you can execute the system under test. No need to traverse the whole class to see which static properties that class refers to (and yes, DateTime.Now is one of such properties).

Note that the guideline of preferring explicit dependencies over implicit ones applies to all dependencies, including loggers.

Programmers often instantiate loggers directly in classes that require logging functionality. The reasoning here is that there’s just too many of such classes, and it’s tedious to pass logger instances manually to every node of the application’s object graph.

Still, a logger is a dependency just like any other and should be injected explicitly. In fact, the tediousness of passing loggers around is a good thing because it indicates one of two issues with the application design:

These are topics for another time, though.

A typical example of an out-of-process dependency is a database — it runs in a process that is external to the main application process.

_repository is an out-of-process dependency. It is also a proxy to data that is not yet in the memory — the user instance.

On the other hand, the User class is in-process (provided that it doesn’t reach out to the database or other out-of-process dependencies).

The second dimension is shared vs private dependencies:

Note that a shared dependency is a dependency that is shared between unit tests, not between classes under test.

In that sense, a singleton dependency is not shared as long as you can create a new instance of it in each test. While there’s only one instance of a singleton in the production code, tests may very well not follow this pattern and not reuse that singleton. Thus, such a dependency would be private, not shared.

For example, there’s normally only one instance of a configuration class, which is reused across all production code:

But since it’s injected explicitly, via a constructor, you can create a new instance of it in each test; you don’t have to maintain a single instance throughout the test suite.

You can’t create a new file system or a database, however; they must be either shared between tests or substituted away with test doubles.

For instance, one test could create a customer in the database as part of its arrange phase, and another test would delete it as part of its own arrange phase, before the first test completes executing. If you run these two tests in parallel, the first test will fail, not because the production code is broken, but rather because of the interference from the second test.

Note that an out-of-process dependency corresponds to a shared dependency in the vast majority of cases, but not always.

For example, the application database is both out-of-process and shared. But if you launch that database in a Docker container before each test run, that would make this dependency out-of-process but not shared, since tests no longer work with the same instance of it. The same goes for in-memory databases, like SQLite.

Similarly, a read-only third-party API is also out-of-process but not shared, even if it’s reused by tests. Again, a shared dependency is a dependency that provides means for tests to affect each other’s outcome. If the tests can’t mutate data in such a dependency, they can’t interfere with each other’s execution context.

For example, if there’s an API somewhere that returns a catalog of all products the organization sells, this isn’t a shared dependency as long as the API doesn’t expose the functionality to change the catalog. It’s true that such a dependency sits outside the application’s boundary, but since the tests can’t affect the data it returns, it isn’t shared.

Here’s a Venn diagram to help drive this point home: 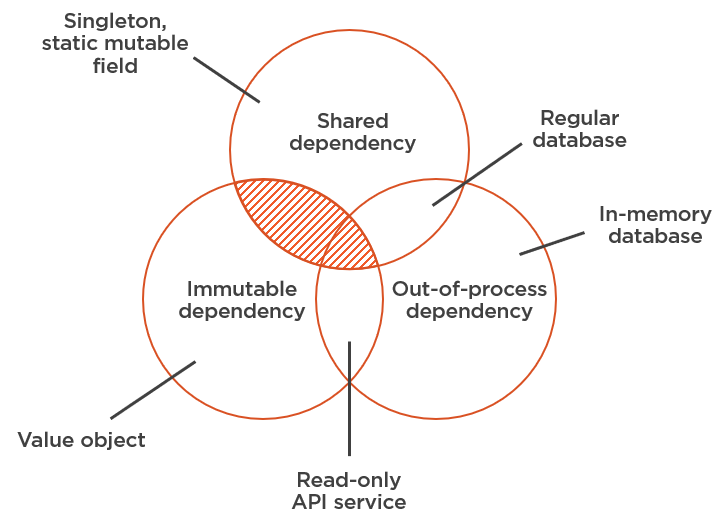 The relation between shared, out-of-process, and immutable dependencies

Notice a couple of things:

The rest is pretty self-explanatory.

Here’s this code sample on the Venn diagram: 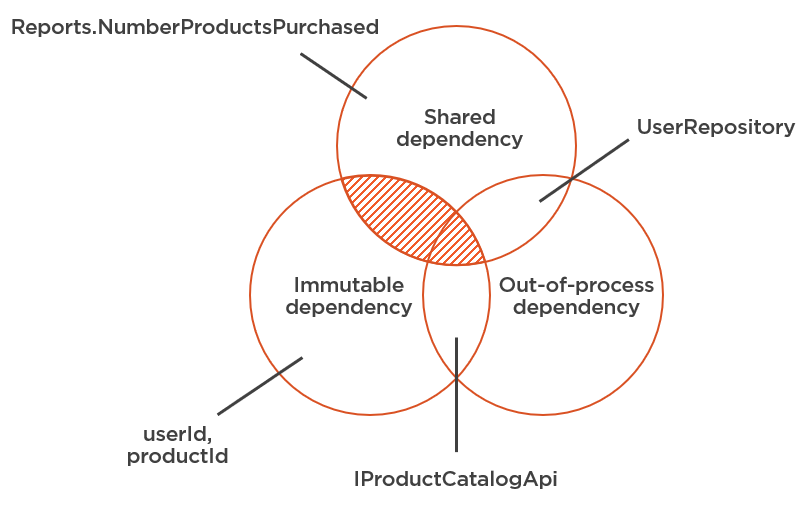 With all this groundwork covered, we can now draw the hierarchy of the types of unit testing dependencies: 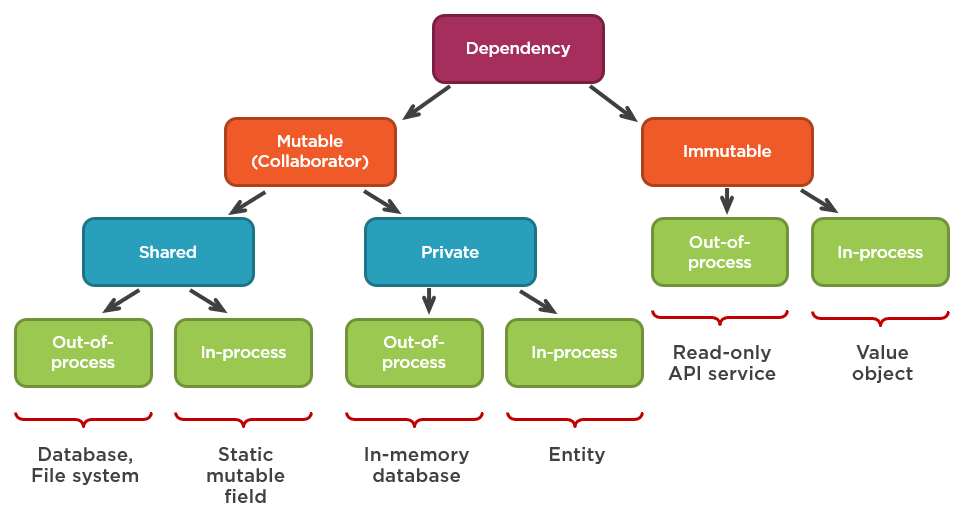 Notice a couple of things about this hierarchy.

For example, look at this method call:

Assuming that both user and product are mutable entities, the product instance is a collaborator, whereas the number 5 is a value.

#2: Subdivision into shared and private dependencies

#3: Subdivision into out-of-process and in-process dependencies

All types of dependencies have out-of-process and in-process counterparts. For instance, a typical example of a mutable, private, in-process dependency is an entity.

In this method call:

that would be the product instance.

#4: Subdivision into explicit and implicit dependencies

There’s a separation dimension to all of these types of dependencies which I didn’t display on the diagram: explicit vs. implicit dependencies.

Each dependency can be either explicit or implicit. For example, the system under test can depend on the database (mutable, shared, out-of-process) explicitly:

But in can also depend on it implicitly:

Again, the guideline here is to always prefer explicit dependencies over implicit ones.

The only exception is immutable in-process dependencies. It’s fine for the system under test to refer to them implicitly. The typical example is enumerations:

Here, ProductType.Shampoo is an in-process immutable dependency — a value. It’s also implicit because the method refers to it via a static field.

Which of course doesn’t make a lot of sense because shampooProductType will always have the same value; it’s a constant.

So, constants and enumerations are exempt from the guideline of preferring explicit dependencies over implicit ones.

The above hierarchy of types of dependencies can be represented differently, by flipping the subdivision into out-of-process and in-process dependencies:

We can also simplify it a little bit. There are two branches on this tree that rarely take place in real-world projects:

So, we can omit these two branches and turn this diagram: 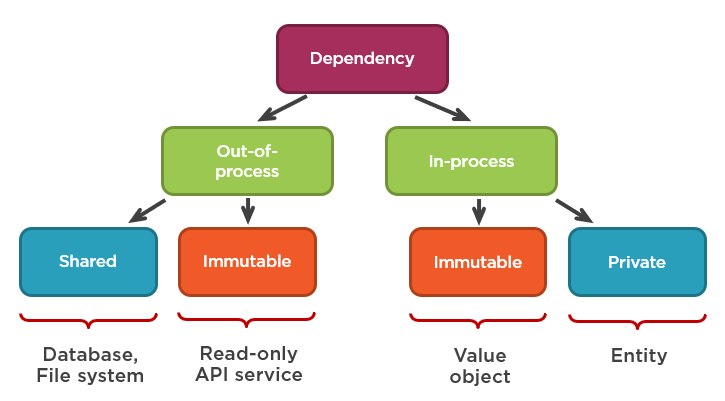 And here’s how the original hierarchy diagram will look after removing these two branches:

Notice that I’ve merged the shared and out-of-process branches together since there’s no branch for shared and in-process dependencies (e.g. static mutable fields) anymore.

Similarly, private and in-process branches now sit together too, since we’ve removed the branch for private and out-of-process dependencies (e.g. in-memory databases).

There’s one more subdivision that you need to know about (managed vs unmanaged dependencies), but that’s going to be a topic for the next article. In that article, we’ll discuss how to deal with all these dependencies — which of them to mock, stub, and which to use as is in tests.

(That’s going to be my third take on the topic of mocks, and I believe the final one.)

You can read more on the topic of dependencies, how to work with them in tests, and how they are related to schools of unit testing in my book:

As I said, this is more of a reference article with not much of an actionable advice, but I hope you found it interesting nonetheless. It lays the foundation for the topic of mocks, which we’ll discuss next.