Modeling Relationships in a DDD Way

There are 4 types of relationships between tables in a relational database:

Let’s discuss each of these types separately.

This is the most common type of relationship. To give an example, let’s say we have a Student and Enrollment tables in our database. The relationship between them would be one-to-many: 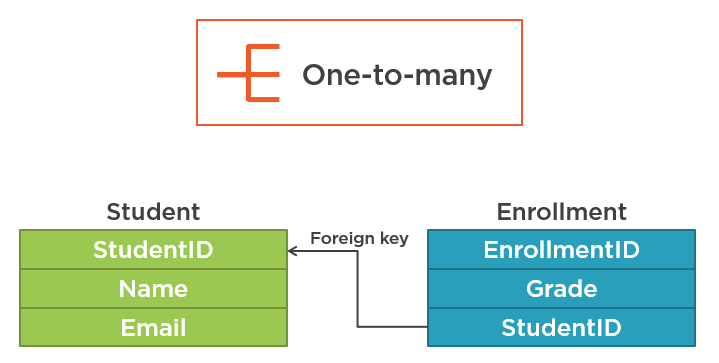 The notation of "one-to-many" reads as follows:

At the database level, you can introduce a one-to-many relationship by creating a foreign key constraint from the Enrollment table to Student's Id.

Another example is a relationship between students and their favorite courses: 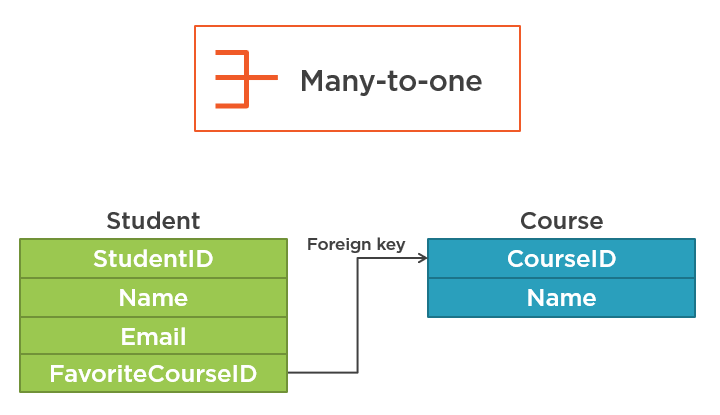 The only difference between one-to-many and many-to-one relationships is which side of the relation you are reading it from.

A many-to-many relationship would be between students and instructors, where each student can have many instructors and each instructor can also have many students:

Finally, a one-to-one relationship is when each row in one table can only have one row in the related table, in both directions.

A typical example is a student and his or her student details: 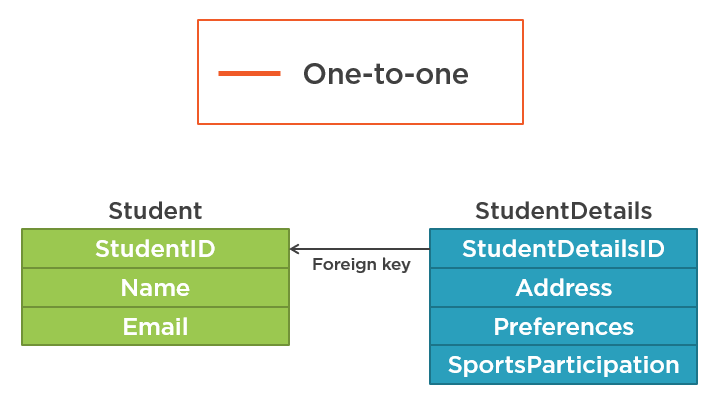 At the database level, a one-to-one relationship can be introduced by creating a foreign key constraint from StudentDetailsID to StudentID.

The above section shows how types of relationships look in a relational database: as associations between tables (represented by foreign key constraints).

Loosely speaking, Codd’s relation is the table itself. Today, it would be more appropriate to refer to relational databases as tabular databases, because the meaning of the word "relation" has changed. Nowadays, we use it to describe the more practical things: one-to-many, many-to-many, and other types of relationships between tables.

What about the domain model? How can different types of relationships be represented there?

One-to-many relationship in the domain model

Here’s how it may look in code:

Notice the difference between the database and domain models:

And that’s where we step into the territory of the object–relational impedance mismatch. This term describes a set of conceptual and technical difficulties that we encounter when we try to combine an object-oriented programming language with a relational database.

This difference between how relationships are represented in the domain model and in the database is the most common and annoying of such difficulties.

In the database, all relationships are represented with a foreign key constraint. There’s no such notion as a one-to-many or many-to-many relationship at the database level. All your database knows about is the foreign key from one table to another. It’s us, programmers, who ascribe meaning to these foreign keys depending on the situation.

In the domain mode, however, we may decide to keep only one end of the relationship:

And therefore, make the relationship unidirectional instead of bidirectional.

The distinction between being a unidirectional or a bidirectional relationship is called parity.

This difference between how relationships look in the database and in the domain model leads to complications when you try to persist your domain objects.

For example, what if we set the two ends of the one-to-many relationship such that they are inconsistent with each other? How would the following domain objects be persisted?

As a general guideline, try to always make relationships unidirectional when possible. This would simplify your domain model and also alleviate the object–relational impedance mismatch.

Let’s now talk about one-to-one relationships. In the domain model, such relationships are represented with a singular reference on both ends:

One-to-one relationship in the domain model

Here’s how it looks in code:

In the above code, each Student may only have one details object and each StudentDetails may have only one student.

This type of relationship is completely unnecessary. You don’t get any benefits out of it. The only thing one-to-one relationships do is they clutter your database.

If two tables relate to each other as one-to-one, merge them into one table.

You don’t really need to split the Student table like this. All the student details data can (and should) be put into the Student itself. This would simplify your database because, all else equal, it’s easier to deal with one table than two.

The only exception is when you need to split a table for performance reasons. For example, when the student details contains blobs, such as files or large chunks of text, that you don’t want to retrieve alongside the student itself.

Alright, but how the domain model would look after removing the StudentDetails table? Do you have to move all its properties to the Student class?

Not necessarily. If the grouping of properties in StudentDetails makes sense from a business perspective, you can keep that grouping, but instead of modeling it as an entity, represent it as a value object:

For all practical purposes, value objects behave exactly the same way as one-to-one relationships but have two significant advantages:

To read more about the differences between entities and value objects, check out this article: Entity vs Value Object: the ultimate list of differences.

Finally, let’s discuss many-to-many relationships. In the domain model, such relationships are represented by collections on both sides of the relation:

This is how it may look in code:

This type of relationship is usually the most tricky one. The problem is that it’s hard to decide which side of a many-to-many relation is the owner of that relation.

In other words, which class should be the entry point for setting up links between students and instructors? You have to pick one to avoid inconsistencies, where the relation is set up on one side but not on the other.

In many-to-many relationships, though, the two sides of the relation are equally illegible to become the owner because both sides are usually aggregate roots.

So, what to do here? The first thing you need to consider is reducing parity of the many-to-many relationship by making it unidirectional instead of bidirectional.

But what if you can’t reduce parity? How should you act then?

In this case, you just have to make a choice and decide which side of the relation is going to be the owner of it. In the example with Instructor and Student, it should probably be the Instructor:

Notice that both Instructor and Student expose an AddXXX method, but only Instructor has this method defined as public and it’s responsible for setting up both ends of the relationship. The corresponding method in the Student is marked as internal, to avoid any ambiguities regarding which class is the owner here.

How do you work with that intermediate table in the domain model?

In the above example, Student2Instructor only contains references to Student and Instructor, and so we shouldn’t introduce a separate class for that table.

But if we were to add, let’s say, a DateAdded field, then we should promote that table into a separate domain class, like this:

Here are other changes to the intermediate table:

Try to avoid composite primary keys in the database. Only use them for many-to-many intermediate tables that don’t contain any other data. For all other tables, use a single-column primary key. And if you need uniqueness guarantees, just introduce a separate unique index.