In this article, I’d like to discuss the differences in using stubs and mocks and show how you can abandon using mocks even in the cases where you need to verify that objects interact with each other correctly.

Before we jump to the actual topic, we need to set some basis and discuss what the definitions of these terms are. The classification of mocks and stubs (as well as fakes and spies) is a bit inconsistent across different authors, but I think the most present, albeit simplified, description would be the following.

Both stub and mock belong to the notion of test doubles. Test double is a generic term used for indicating some kind of dependency substitution for the test purposes: 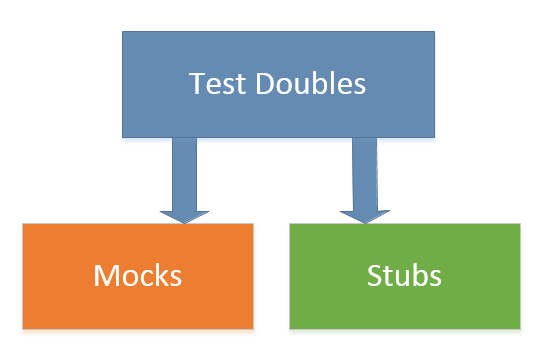 Do we need mocks for testing interactions between objects?

In a typical enterprise software, it is possible to use test doubles only with integration tests and use real classes for unit testing. It is feasible because there is a domain model in such applications, which can be extracted from other parts of your code base and used for unit testing. The domain model usually don’t contain any external dependencies, hence no need for test doubles.

In other types of software, such as 3rd party libraries, you rarely can avoid using some kind of a test double in unit tests.

An example here could be a callback object, methods of which the SUT has to invoke in an exact sequence. A common way to verify the SUT’s behavior in such situations is to use mocks. Programming a mock for a particular order of operations and verifying that order afterward helps us to check that the SUT interacts with the callback correctly.

But do we really need mocks to do that? Can stubs do a better job? Let’s take a code example that relies on mocks and see if there are any benefits in transforming it into a version that uses stubs.

In the sample above, we are testing how the Parser class interacts with IHandler. In order for the Parser to be correct, it should call specific methods of the handler in a particular sequence.

The mock does a pretty good job here, but the code sample has the flaw we discussed in the previous article: the test relies on the implementation details of the Handler class and thus is prone to refactoring.

Let’s see how we can write the same test using a hand-written stub. First, we need the stub itself:

The stub basically records all the interactions that come from the outside world and provides methods to validate those interactions.

Now, we can use this stub in our test:

As you can see, we achieved the same result with no mocks whatsoever.

The distinction between the former and the latter versions of the test might seem subtle, but it is rather significant. With mocks, you have to mimic the IHandler interface with every test that uses it, which leads to code duplication and thus to brittle design. Every change in IHandler would cause cascade failures throughout all tests that use it.

With stubs, you pack the fragility into a single stub implementation. You abstract your tests from the internal details of the dependency. If you change the Handler interface, you need to adjust the stub only once; you don’t have to touch any tests that use it.

That’s the power of a reliable test suite. Hand-written stubs help create unit tests that verify the end result of an interaction without knowing the internal implementation details of that interaction. They help us adhere to the most important TDD rule, which is keeping the tests one level of abstraction above the code they check.

I have to make a note here. Although I strongly advocate you prefer stubs over mocks, there are situations where you are better off choosing mocks. In the cases where you need to create only a single unit test that uses a dependency, there are no effective differences between a test that relies on mocks and the one that employs stubs.

In both cases, you would need to change the code only once should a refactoring occur. Because of that, mocks would be a preferable choice as they require less up-front effort than stubs. But whenever you see you start having more than one test that substitute the same dependency using mocks, you should switch to a hand-written stub instead.

If you enjoyed this article, be sure to check out my Pragmatic Unit Testing Pluralsight course too.

Even in situations where you need to test the correctness of the interactions between classes, you can check the end result of those interactions, not the behavior that led to that result.

Stubs help us do that. Although using them require more up-front effort, it pays off greatly. Tests that rely on stubs are less prone to refactoring and thus lay the ground for building a solid unit test suite.

The source code for the code sample can be found here.