Today, I’d like to discuss the differences between interfaces, abstractions and .NET interfaces, as well as what the term "implementation details" means.

Since .NET came out, the interface language feature it introduced slowly captured the term "Interface". Nowadays, the C# keyword "interface" is often taken for the only possible way to introduce an API. The terms "Interface" and ".NET Interface" are used interchangeably by many.

Moreover, it is often considered a bad practice to work with classes directly, especially in the case of Dependency Injection:

But is that really the case? To answer this question, we need to step back and recall what the term "Interface" really means.

API is a set of functions client code calls in order to use the functionality a class introduces. There’s a simple thing that differs interface of a class from its implementation details, and that is "public" (and also "internal") keyword. Every time you add a public method to a class, you change its interface. And every time you call a public method, you use the API of a class.

While .NET interfaces do represent API, i.e. something you can code against, it is incorrect to attribute the term "Interface" exclusively to them. Every class has its own interface that is defined as a set of public methods.

Always depend upon abstractions, not implementations. 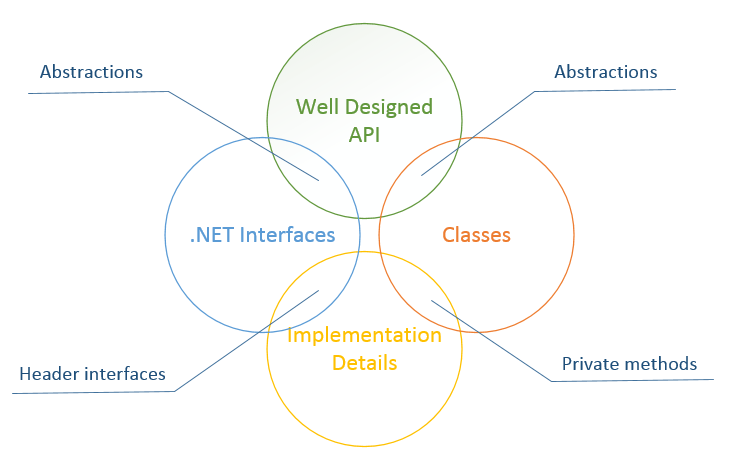 This diagram shows the relationships between those notions. .NET interfaces and classes that are well-defined have a solid and clean interface which make them a good abstraction of the concept they describe.

On the other hand, poorly designed classes tend to expose their internal structure to the clients and thus break encapsulation principles. As for poorly designed .NET interfaces, there’s actually a special term: Header interfaces. It means that, rather than introducing some high-level cohesive set of methods that belong to a specific role, the interface just mimics the structure of a class. And, of course, whether or not a class or .NET interface is designed poorly, depends on the context.

While it’s true that, from a client code perspective, there’s no difference in using a .NET interface or a class, it is not always the case if we look at the whole picture.

How often do you see an interface with a single implementation? Frequently, they are created mechanically just for the sake of "loose coupling":

The last thing I’d like to mention is unit testing. There’s some uncertainty in the question of whether or not the creation of .NET interfaces for the purpose of mocking is a smell. I personally tend to avoid such situations, but it’s not always possible. I’ll try to describe this topic in a future post.