3 things that will make or break your project

This article is about 3 things that can make or break any software project.

Now, I know what you might be thinking right now — what is this, Cosmopolitan? Also, why three, and not five or twenty?

I know, the title sounds cheesy, but I do believe that these 3 things have a detrimental effect on any software project. And when it comes to purely technical reasons why a project succeeds or fails (that is, not taking into account possible organizational issues), these things form about 90% of those reasons. Consequently, targeting these 3 things will get you 90% of the way to success (again, organizational issues aside).

The first one is following the YAGNI and KISS principles.

YAGNI stands for "You aren’t gonna need it" and advocates against investing time in functionality that’s not needed right now.

Think about all the code software developers write on a daily basis, and ask yourself — how much of it is truly aligned with the customer’s needs? And by truly I mean such that the project won’t meet its functional and non-functional requirements without that code? I bet it’s less than 100%. In some cases, significantly less.

I remember myself in the beginning of my programming career. For any task, however simple it was, I tried to foresee future needs and lay out as many "extension points" as possible, just in case we need them. As a result, the application grew into a framework where the current requirements were a special case of a much larger functionality set the application was capable of. My goal was to build an application that would stand the test of time and wouldn’t require a lot of modifications even in the face of possible requirement changes.

Of course, this line of thinking is completely backwards. Extension points never turn out in right places; they impede, not help future development. A truly extensible and easy-to-change application is one where you delay as many architectural (i.e. set-in-stone) decisions as possible. You can’t know future needs. Your best bet is not to make such predictions at all.

Always build as specific solution as possible for the requirements you have at hand. So specific that it will be easy to understand and change if needed. Always ask yourself questions like:

We are curious creatures and often rationalize our desire to try out new things with the "this will pay for itself in the long run" attitude. It almost never does. Don’t fall for this trap.

So, again, don’t invest time in functionality that’s not needed at this particular moment. You shouldn’t develop that functionality, nor should you modify your existing code to account for the appearance of such functionality in the future. The two major reasons are:

The KISS principle stands for "Keep it short and simple". It’s similar to YAGNI, and people often conflate the two. But, although the two principles are best applied together (that’s why I’m putting them both as #1), technically, they are not the same thing.

YAGNI and KISS working together

It’s hard to overestimate how important simplicity is. Simple code allows you to easily understand it, which is the most important property for most applications.

It may sound controversial, but think about it this way. Which one is more important, the ease of understanding the system or that system’s correctness?

In the short term, correctness is surely more important. But as long as you continue development, readability starts to have an increasingly large effect. The situation with a bugless but unreadable code is unstable. Most likely, you will introduce bugs with future changes because you can’t fully understand that code base. On the other hand, with a simple and readable source code, you can quickly find and fix those bugs.

There’s a lot to be said about tactical and strategic patterns in DDD. Those patterns can indeed be helpful (as long as they don’t contradict YAGNI and KISS), but if I were to boil DDD down to the absolute must-haves, I would say this. The most important parts of DDD are:

You can choose to use Entities, Value Objects, Aggregates, and other typical DDD patterns at your discretion. Not using them is perfectly fine too. The above two practices, however, are the essence of DDD and must be followed at all times in any project.

So, what do they mean, exactly?

Focusing on the core domain

Focusing on the core domain means:

It’s hard to overestimate the importance of the explicit boundary around the domain model. It’s not only about having a separate directory for domain classes. It’s also about isolating those domain classes from out-of-process dependencies and all other application concerns, so that it remains pure and focused.

The best way to maintain proper domain model boundaries is to adhere to a hexagonal architecture. With it, you represent your application using two layers: domain model and application services.

The combination of the application services layer and the domain layer forms a hexagon, which itself represents your application. It can interact with other applications, which are represented with their own hexagons. These other applications could be an SMTP service, a third-party system, a message bus, and so on. A set of interacting hexagons makes up a hexagonal architecture: 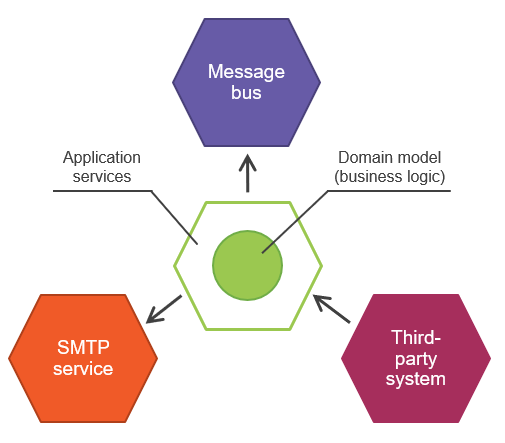 A hexagonal architecture is a set of interacting applications — hexagons.

The term hexagonal architecture was introduced by Alistair Cockburn. Its purpose is to emphasize three important guidelines:

Again, a hexagonal architecture is the best way to maintain the focus on the core domain. It’s not a coincidence that the domain model resides in the center of the hexagon.

Encapsulation is another important piece of the puzzle. It’s not enough to define a model layer with explicit boundaries. You also need to keep all operations within that domain model internally consistent.

This is where encapsulation comes into play. Encapsulation is the act of protecting your code against inconsistencies, also known as invariant violations. An invariant is a condition that should be held true at all times.

Encapsulation is crucial for code base maintainability in the long run. The reason why is complexity. Code complexity is one of the biggest challenges you’ll face in software development. The more complex the code base becomes, the harder it is to work with, which, in turn, results in slowing down development speed and increasing the number of bugs.

Without encapsulation, you have no practical way to cope with ever-increasing code complexity. When the code’s API doesn’t guide you through what is and what isn’t allowed to be done with that code, you have to keep a lot of information in mind to make sure you don’t introduce inconsistencies with new code changes. This brings an additional mental burden to the process of programming. Remove as much of that burden from yourself as possible. You cannot trust yourself to do the right thing all the time — eliminate the very possibility of doing the wrong thing. The best way to do so is to maintain proper encapsulation so that your code base doesn’t even provide an option for you to do anything incorrectly.

Encapsulation can be achieved by:

As a programmer, you should do both. You should eliminate as many data-mutating operations as possible; and you should also carefully safeguard the remaining such operations for internal consistency.

Functional programming takes these two guidelines to an extreme and eliminates all mutable operations. With immutable classes, you don’t need to worry about internal state corruption because it’s impossible to corrupt something that cannot be changed in the first place. As a consequence, there’s no need for encapsulation in functional programming. You only need to validate the class’s state once, when you create an instance of it. After that, you can freely pass this instance around. When all your data is immutable, the whole set of issues related to the lack of encapsulation simply vanishes.

There’s a great quote from Michael Feathers in that regard:

If you want to learn more about Domain-Driven Design, there’s a good set of courses on Pluralsight on this topic (of which I’ve authored most — full disclosure). If you don’t have much time getting into all the details, I highly recommend this single course of mine. It’s a relatively short tutorial that uses a close-to-real-world example to show how to refactor your application toward encapsulation.

Unit testing is the third thing every project must practice to achieve success in the long run.

Just having unit tests is not enough, though. Only tests of high value are worth keeping in your test suite. There’s a lot to be said about how to build a highly valuable test suite (which I did in my recent book about unit testing), and I’ll try to lay out the most important bits in the subsequent articles.

One of the most interesting points, though, is that it’s virtually impossible to write highly valuable tests without focusing on the core domain and maintaining encapsulation.

These 3 things get you 90% of the way to success for any project (not taking into account possible organizational issues):